Following on from our successful September Houlden Exhibition, we share further coverage in the trade press with regard to our Members placing more orders than ever before and exceeding all previous records by 100%. Read the articles below. 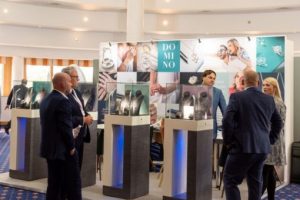 Luxury jewellery buying consortium The Houlden Group has reported that orders placed at its recent Members and Suppliers Meeting exceeded all previous records by 100%.

The event, which was held on 2 and 3 September, was the first formal network meeting for the group in 18 months and attracted 50 suppliers, showcasing their latest collections.

Houlden members, who had previously reported during the pandemic that they had drawn on existing stock rather than replenishing, unanimously expressed a new sense of optimism and a greater confidence in the future.

According to Houlden, this impacted the buying pattern at the event with members focusing on placing bigger orders from fewer suppliers and many suppliers said they opened new accounts at the event.

Helen Haddow chief executive Houlden Group said: “Much thought and care goes into selecting our Preferred Suppliers to ensure an exciting breadth and range to reflect the different and varying needs of our members.

“In addition, the shared monthly purchasing data not only assists in the buying process but also helps identify those suppliers leading the charge.”

One dominant trend that emerged from the meeting was the growing interest in Laboratory Grown Diamonds (LGD) with several suppliers offering them either loose or in finished collections.

Many members expressed interest in learning more about this product, with much discussion on how best to integrate them within their overall offering as a means of increasing their customer base.

Haddow added: “Sharing the issues and challenges posed by synthetic diamonds and providing a platform for constructive debate and support is very much part of the Houlden Advantage.

“Members are there for each other and one of the most pleasing aspects of the Autumn meeting was the strong feeling of solidarity and belief in the collective strength of being part of Houlden.”